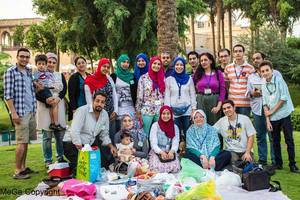 How to grow Streetbank anywhere in the world

Since July this year, over 15,000 new members have joined the Streetbank movement across the Arab world – following a Streetbank feature on Ahmad Alshugairi’s programme Khawa6er.

It’s been hugely exciting for us in the Streetbank office in London to watch things growing internationally and to be forging links with people in cities such as Cairo, Dubai and Amman…

In Cairo, Rana and Karim are championing Streetbank and there are now over 900 people sharing across the city and hundreds more across Egypt.

Wondering how they’ve made this happen?

Firstly, Rana, Karim and a few neighbours got together to think about how to get more people interested in Streetbank.

They then planned and promoted their first neighbourhood meet-up; a bring-a-dish party at a central location in Cairo.

Now, they’re planning a series of street parties to get things really buzzing where they live.

“It was a very nice gathering. The atmosphere was warm and cozy because most of the people who came were acquaintances of Karim, Walaa, and Myself. All in all, we were 25 and it was a great day.”

They started with a game to break the ice – with people introducing themseleves in pairs and finding a common interest before moving to the next person.  After an introduction from Karim, to explain what Streetbank is all about and what their shared vision for Cairo is, it was time to share the delicious food that everyone had brought.

Last but not least, people exchanged pre-loved gifts that they’d been asked to bring along.

The event was a perfect introduction to what you can do using Streetbank and it showed that there’s no shortage of generosity in Cairo - sometimes it just takes the efforts of a few to bring that generosity to the fore.  And this is what Streetbank is all about.

Start planning your own Streetbank meet-up and get in touch for a little help to get started.

I watched Ahmad Alshugairi’s programme Khawa6er, and now involved with it in Sydney :)